Invest in Children
Give your child a head start in life

The best home to raise your kids

When we think of the best place to raise our kids, we have to think about what kind of surroundings contribute to a healthy well adjusted child. I grew up on a grain and cattle farm in southern Saskatchewan and I think that was an awesome experience. We had acres and acres of land to run around on and the freedom to do a lot of things you can’t do in the city. We spent most of our free time riding our bikes in the summer and cross country skiing in the winter. We also had horses, motorcycles, a trampoline, and fresh country air. Sometimes the fun stuff got combined with farm work, like when we had to ride our horses to herd cattle. The school we attended was very small, and most of the students were farm children, so there was a certain innocence about the place. It wasn’t all great though, as it could get pretty boring sometimes because we were so isolated from civilization.

Now contrast this with growing up in a large city and you will see quite a few differences. For starters, when you live in an apartment, townhouse or even a single family home, you do not 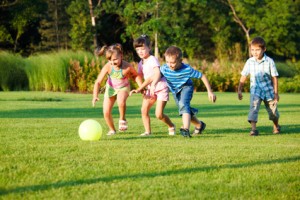 get a lot of room to roam. Most houses don’t have very large yards, but that is infinitely better than trying to raise a child in a condo, especially an apartment style condo. Kids need to be able to wear off energy, so they need some space. I can’t imagine telling the kids to go run around on an apartment balcony 30 stories up. But even the single family home may be out of reach for a lot of families because of ever rising prices. Add to that the fact that most big cities in Canada are encouraging and sometimes legislating that new communities in the suburbs be denser and denser. That means that the size of the yards is getting smaller and smaller and the homes are being built much closer together. To see this all you have to do is drive through any new community in your city and you will see what I mean. So, young families will be forced to live in apartments and townhouses because that is all they can afford. I would argue that is not very good for our children. If they don’t have any privacy or room to play at home, they might not get enough exercise and this could cause problems at school.

I think if money were not an issue the best place to raise a child would be on an acreage just outside of a decent sized city. That way you would get the advantages of rural county life while just being a stones throw away from all the services, excitement and amenities of the city. Once your kids grew up they could attend university in the city while commuting in and out of the city to your acreage every day. They would save a ton of money, and you would get to have them at home a lot longer , unless of course you don’t want that.

Otherwise if you can’t afford an acreage, I think a single family home in the city is the best option. If money is tight, this will require a disciplined approach where you save enough for a 5% down payment and only buy a house that meets your needs and nothing more. If you can’t afford luxury, don’t buy more than you can afford. Make sure you get the very best mortgage rate possible, by talking to a mortgage broker and your bank. You have to negotiate and play hardball. Your bank will not give you a great rate out of the goodness of their heart – they don’t even have a heart. They are a large faceless corporation.

We did some research and here is a list of realtors and builders that come highly recommended in each city:

Broder Homes       This is in rural central Alberta near Lacombe, and in the town of  Blackfalds where you can buy a new home on a large lot for under $250,000